"No Somos Delito" ("We Are Not Crime") was formed in late 2013 to counter the attempt of the Spanish Government to undermine peaceful protest and civil disobedience. It is an umbrella organisation formed by more than 70 civil rights associations, social movement groups and NGO's.
This attack on pacific protest is being promoted by the Spanish Government with three different laws: Código Penal (Criminal or Penal Code), Ley de Tasas (Fees Act) and Ley de Protección de Seguridad Ciudadana (Citizen's Security Protection Act). The government will penalize protest with increased fines, which will be processed administratively rather than judicially, thereby denying protesters the right to due process, and the impartial judgement of a judge. People affected can later ask for a trial, but to access justice they will need to pay additional fees, introduced with the Fees Act, approved in 2013. Regardless of the route (administrative or judicial) the protesters fined will have to pay for their democratic right to protest, which is clearly intended to act as a deterrent.
These reforms come at a time when protests have become massive and very frequent in Spain: In 2013 alone there were more than 3,000 demonstrations in Madrid - almost all of which were peaceful, as police only needed to act in less than 1% of them, as their own figures show. These protests were at first fuelled by the economic crisis and many cases of corruption, which led to the rise of the "15-M/ Indignados" movement in May 2011, and have more recentlybeen directed against the Government's lack of social dialogue, massive spending cuts (health, education...) and its promotion of very unpopular laws (ban on abortion, new electoral law that will penalise small parties, etc.).
No Somos Delito thus demands the immediate stop of these reforms and the acknowledgement by the Spanish Government of the value of peaceful protest towards the advancement of democracy and civil rights. 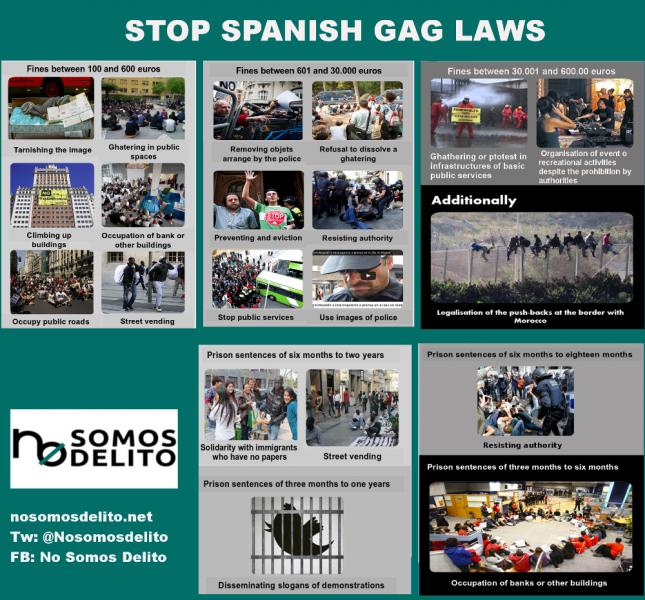 Some references in English
The State Strikes Back: The Criminalization of 15-M and Social Movements in Spain
http://austerityprotests.wordpress.com/2014/06/05/the-state-strikes-back-the-criminalization-of-15-m-and-social-movements-in-spain/
Video of FrontLine Defenders "Repression of social protest in Spain"
https://www.youtube.com/watch?v=Z3lILPGhzN0
Spain's Marches of Dignity 22M 2014: Not anti-politics: https://www.opendemocracy.net/can-europe-make-it/cristina-flesher-fominaya/spain%E2%80%99s-marches-of-dignity-22m-2014-not-antipolitics
Spaniards Take to the Streets to Protest ant-prostest Laws: http://www.newsweek.com/spaniards-take-streets-protest-anti-protest-laws-238211
Tweets por @Nosomosdelito